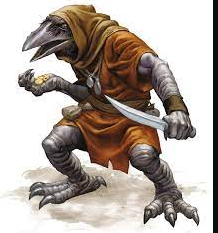 Kenku are cursed beings deprived of their flight and voices, wandering the fabric plane in an attempt to survive. As an easy-to-play cackling monster, Kenku was first introduced back in third-version D&D as a participant race. In slums and oppressed cities, Kenkus carve out their territories. Birds are pinchers and pilferers much like their raven cousins.

Although the true origins of the Kenku are unclear (largely due to conflicting lore between editions) the story has similar elements regardless of how the appropriate nouns are modified. Kenkus were a bird-folk with wings, innovative talents, and their own voice. Through stealing an extraordinarily important bright bauble, they served some dark grasp. The Kenku 5e have been caught and subjected to all-mighty deity degree punishment and nerfed to oblivion, and then they’ve been let loose on the fabric plane.

Low-light vision: The ability to see well in low light
Language(s) spoken: Auran, Common, Kenku
My favorite climate is a temperate one
Plains is her favorite terrain
Statistics from the Fifth Edition
Dimensions: Medium
It is humanoid in nature
Kenku (Tag)
The alignment is chaotic neutral
Score: 1 out of 4

5 ft (1.5 m) is the average height
Weight: 75 lbs on average. 33 kg on average.
The feathers are russet-brown in color
Black is the color of the eye(s)
Features: Talons instead of hands and feet; voice mimicry

The Kenku 5e instinctively ignore their potential to fly and their goals take them upward. Because Kenku flocks are naturally drawn to high places, they often settle in ruined towers or exceedingly forgotten areas amongst the sprawl of a city, as they often have no resources of their own. Kenku find out about magic to acquire flight-related spells and gadgets specifically to one day be able to fly.

Names of the Kenku

Laughing, Chewing, Clapping, Duck Quacking, Fnasher, Lute String, Mallet Smash, Mauler, P
The Kenku lack empires or fortunes, and scrape by using the skills their human ancestors left, such as mimicry and thievery. While each Kenku is able to repeat flawlessly the matters they hear, they have no voice of their own. As a result, their “vocabulary” is built from phrases they’ve heard, and their speech is usually uneven and fragmented. In addition to this lack of voice, Kenku also discovers that it is impossible to create new things, a wound still aching from their ancestral curse. It remains an echo of culture, continuously emulating but never forming a way of life all their own.

It has a limited appearance, unlike most races in 5e. Kenku are raven-like, unlike Aarakocra, which gets the splendid description of “like a bird”. Crows and ravens are more diverse than most humans realize, so you have a little wiggle-room.

Magpies, ravens, and crows share quite a bit of stereotypical black feathers, but you can also have fun with mottled white and black patterns or the spectral iridescence of raven feathers. Additionally, you can play around with a lot of subjects using a simple raven. A corvid embodies the arcane mysticism of a wizard’s familiar, the macabre mortality of the carrion bird, and the comical mischief of the mockingbird.

Kenku names are actually sound results rather than something that can be written down.

Kenku aspire to mimic the bang of a gunshot, the mild wind among autumn leaves, or the squeak of a rat as their title. No gender is attached to Kenku names, but the names do tend to indicate the Kenku’s occupation or role. Soldiers will be named after the sounds of warfare, like the clang of a sword or the twang of a bowstring. Normally, Kenku in metropolis underbelly use noises that can be ignored by alley animals, like rat scratches and pigeon coos. Lastly, Kenku with everyday professions generally take a title associated with it, like ocean spray for a sailor or wood shavings for a wood worker