The Evolution of a Character Race: Firbolg 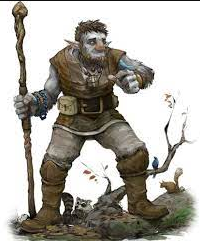 I love firbolgs in Dungeons & Dragons fifth edition. The racial traits of their race seem taken straight from a fairy tale. D&D races are a fusion of the mundane and the monstrous. The sweet and the savage, creating a dynamic that is unique to the genre. A firbolg character would suit players who want something different from a half-orc or goliath barbarian.

The firbolgs of D&D’s 40-plus-year history, however. Were nothing like the red-nosed, gray-furred creatures we recognize from Volo’s Guide to Monsters. In the Monster Manual II (1983), they made their debut as a type of giant in the first edition of Advanced Dungeons & Dragons. Check out this unique race and what they look like today. From their first edition to their latest facelift in Critical Role.

A brief history of the firbolgs

Firbolgs have always ranked second as a creature of D&D lore throughout their existence. The monsters reappeared as monsters in second edition AD&D in the Monstrous Compendium Volume Two (1989), in the third edition Monster Manual II (2002) as a playable character race as well as a monster, and once again in the fourth edition Monster Manual 2 (2009). Volo’s Guide to Monsters, the edition’s second book of monsters, included them as a playable race in fifth edition.

Since their inception, Firbolgs have been giantkin. Firbolgs in fifth edition are fuzzy, druidic protectors of nature, while they are mighty warriors in first edition. The minor giants were explicitly described as the most powerful—presumably referring to giants outside of the ordning, such as fomorians. Nevertheless, the firbolgs had the capability to shrink to the size of a normal human even back then.

Traditionally, firbolgs were cautious, crafty, and solitary giants with a predilection for illusion magic, and their shamans excelled at creating illusions as well. To defend themselves, firbolgs used giant-sized greatswords and halberds, but they also enjoyed assuming humanoid sizes and stealing treasure from adventurers that trusted them.

In early editions of D&D, this concept of the firbolg was more or less unchanged. Over the years, some details were added. According to the second edition of the Monstrous Compendium, firbolgs’ love of nature is due to their distrust of other races. Since they were not interested in mixing with other people, they simply adapted to living in the wilderness. Firbolgs had lost much of their illusion magic by the third edition. Only a spell-like ability that allowed them to cast alter self once per day remained from their original ability to shrink to human size. As early as 2002, illusionists were becoming a thing of the past.

In fourth edition, the firbolgs underwent a major overhaul, as part of this process of dissolving old abilities and lore. Fourth edition firbolgs were no longer cunning giantkin but instead shamans and barbarians of the Feywild who led the Wild Hunt. Warriors and shamans worshipped a trio of goddesses that were similar to the Morr*gan of Irish mythology. A triple goddess also known as neutrality, destiny, and death. Maiden (Sehanine), Mother (Melora), and Crone (the Raven Queen) were the three goddesses. Firbolgs were once again consigned to a book of monsters in fourth edition. But they weren’t elevated to a playable race like in third edition.

Firbolg artworkThis year’s giantkins are, in some ways, returning to form. Firbolgs are once again innate illusionists and reclusive forest guardians despite losing their pseudo-Celtic aesthetics of D&D’s early editions and the Feywild of fourth edition. Although not humorless or aggressive. They are swift and merciless when it comes to judging those who would defile the woodland.

After Volo’s Guide to Monsters was released, firbolgs mostly slipped under the radar. Despite being the first time in the history of D&D that firbolgs appeared as player characters and not monsters, their unusual abilities made them difficult to gain fans. The hit die penalties and level adjustment made them. So hard to play that they were only suitable for high-level campaigns in third edition. With no level adjustment or other barriers to entry removed, firbolgs were open to new players. But even with all these barriers removed. Their characters still lacked visibility. But then Critical Role came along.